It Was Trump, Not Antifa

Dear friends of mine who support Trump:

Your “it was Antifa” claims have all been disproven, but it did buy you an additional 12-24 hours to come up with some other cover.

Good job! Your strategy worked! …but not for long! 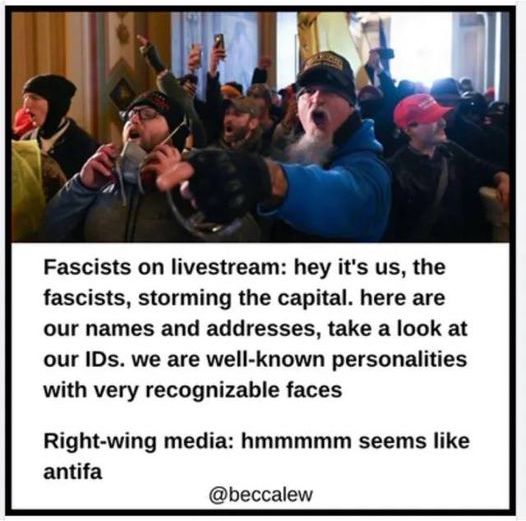 Trump tried to tell House Minority Leader Kevin McCarthy (R-CA) it was “Antifa people” who stormed the Capitol. But McCarthy was having none of it: “It’s not Antifa, it’s MAGA. I know. I was there.” When Trump tried to rant about election fraud, McCarthy interrupted: “Stop it. It’s over. The election is over.”

Are you saying that Kevin McCathy was part of Antifa? That he’s been pretending to be a Republican for decades?

During the attempt to murder congresspeople, your Q-crazy buddy Boebert (newly elected from Colorado) was txting updates about the location of Pelosi and others to aid and abet the terrorists.

Are you saying that Boebert is part of Antifa? Was she running a fake campaign for the last 2 years just so that she could be an insider during the attack?

The morning of the terrorist attack, Proud Boys sent out an Instagram story saying “We’re breaching the Capitol today, guys. I hope y’all ready.” Are you saying that Proud Boys are secretly a front of Antifa? That would mean that 15 years ago Antifa (which didn’t exist) sat down and planned this all out. You really think that happened?

Oh, and after it was all over Trump threw you under the bus. What suckers! NYTimes has been documenting Trump’s history of stabbing supporters in the back for the last 5 years. It must suck that you didn’t read those articles because Trump kept telling you not to!

Maybe you should read outside of your bubble.

To my friends that have been supporting these domestic terrorists. What do you have to say for yourself? Do you think you’ll end up in jail with the rest of them?

This is your coup. pic.twitter.com/3iOR2I55ih

It’s time to wake up, admit what you did wrong, and join the fight against the insurrectionists.

P.S. What’s next? Claiming the impeachment would divide the country?

When a Republican says “impeachment is divisive” it’s the same as when an abusive spouse tells you that if you leave or call the cops, you’re the one tearing the family apart. @DanteAtkins