In this article [Show]

Here are some of my favorite secrets about Google Docs, Google Sheets, Gmail, etc.

Sharing a doc, sheet, or diagram? In the upper right hand of the screen is an avatar, or image, that represents each person currently in the doc, spreadsheet, or whatever.

If you click on someone’s avatar, your cursor will jump to where their cursor is. It’s awesome.

Most Google Workplace apps have keyboard shortcuts (including Gmail!). You have to enable them in settings. Once enabled, pressing the ? key will give you a list of surprisingly useful shortcuts.

Secret #3: Google Calendar has a Trashcan

Did you just delete an event from your calendar by mistake?

It’s in the trashcan.

When you create an event in Google Calendar, there is a “Suggest Times” button that will tell you the next few times that all the attendees are available to meet.

Sadly you won’t find it if you go look for it right now.

Still can’t find it? Here’s what it looks like: 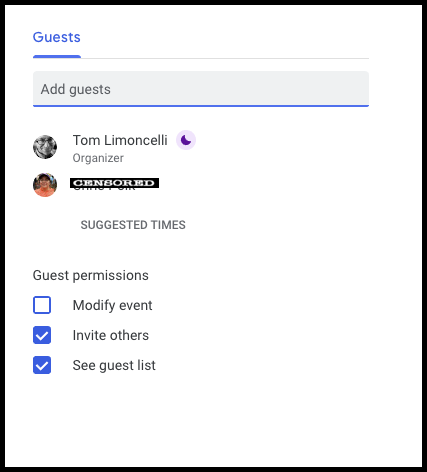 Secret #5: New features in Calendar are a new thing

From 2011 to 2017 Google had zero developers assigned to Google Calendar. That’s why the product didn’t change during that time… more than half a decade. If a security issue was found, they scrambled to find someone to fix it. If your salesperson promised you a new feature or said, “oh yeah, we’ll be fixing that soon” they didn’t know how wrong they were.

Luckily there has been a spat of new features in Google Calendar lately. I’m super excited about what they’ve done so far and look forward to seeing what they’ll add next! (Maybe have settings save automatically?)

And you know the problem where a doc has a ton of comments and clicking on one gives zero visual indication as-to which text it refers? No, it isn’t just you. Nobody can figure that out either.

Oh, and why do bullet lists work so badly in Docs? I don’t know either but I once asked a Google Docs feature designer why it doesn’t work very well. He asked, “how should it work?” and I replied “The same way as MS-Word. They’ve really thought out all the edge cases.” and he said AND THIS IS AN EXACT QUOTE “oh, I try not to use competing products because” and I can’t tell you how he finished that sentence because I got so angry that my bloodpressure caused me to temporarily go deaf. You see, I had recently been out to Seattle to visit a friend that worked for Microsoft and she had told me the reason she was using an iPhone was because it is her job, as a product designer, to know the competition.

Ok, those weren’t real secrets. But don’t you feel better knowing that it’s not just you?

I find it annoying that books with titles like “Microsoft Word Secrets” and “WordPress Secrets” and “C++ Secrets” never list actual secrets.

A book with such a title should have real secrets. Secrets like “The guy that wrote the feature was fired because (something terrible) but management told the team he just decided to leave” or “The product manager for this product changed three times in three months and that’s why the Spell Check feature is a mish-mash of different designs.”

Ok, that’s not really a secret. I’ve been making that joke for years.

Secret #8: I hardly get comments on my blog.